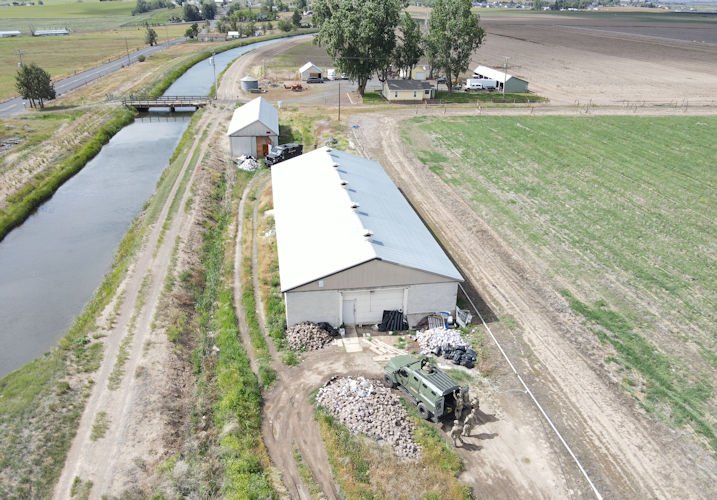 On Tuesday, as initially reported earlier, detectives with the Central Oregon Drug Enforcement Team, Jefferson County Sheriff’s Office, Deschutes County Illegal Marijuana Enforcement team, and U.S. Homeland Security Investigations concluded the two-year investigation involving an international drug organization that is alleged to be growing and processing illicit marijuana from Madras and Culver before delivering it to Portland for nationwide distribution.

The CODE Team case began with community complaints, and tips about several of the organization’s 20 grow locations in the Jefferson County area. As a result, Jefferson County Sheriff’s Office detectives began investigating and discovered a complex criminal network that required investigative assistance.

Jefferson County sheriff’s detectives requested the assistance of the CODE Team and the Deschutes County Illicit Marijuana Enforcement Team to further their investigation.

Over the next 18 months, CODE and DCIME detectives, special agents, and intelligence analysts conducted hundreds of hours of physical and electronic surveillance on over 23 members of the organization, 20 properties, bank accounts, and Chinese-food restaurants around the Pacific Northwest and Asia.

With the assistance of the US Drug Enforcement Administration, Internal Revenue Service, US Customs and Border Patrol, US Department of Homeland Security, CODE, and DCIME, Detectives determined the organizational structure and identified the leadership. It was discovered that proceeds from the marijuana sales were often laundered through Chinese restaurants and businesses before being diverted back to China, disguised as an international business transaction.

A 64-year-old Madras man is alleged to be one of the leaders in this criminal organization. The illicit grow site properties are owned mainly by him or with his family members or a business entity owned and controlled by him. A few other property owners have been identified as members of the organization and are still outstanding at his time, officials said.

Most of the14 Chinese laborers contacted by detectives were trafficked into the United States through Mexico and found work in restaurants throughout Oregon and Washington. Later, this cartel organization recruited restaurant laborers to work in the illegal marijuana trade for salary. The laborers were found living at the grow sites and often were moved by the cartel from one grow site to another.

During the raids, 15 people were detained, and 16,240 pounds of processed marijuana, 17,704 plants, four firearms and a “large US currency cache” were seized as evidence, drug agents said.

Five men were arrested at the scene and later lodged at the Jefferson County Jail. All were charged with illegal marijuana manufacturing, delivery and possession, while the Madras alleged leader of the operation also was charged with illegal possession of a firearm. Two of the men were from Madras, one from Beaverton, one from Portland and the fifth from Brooklyn, N.Y.

Several additional suspects, both foreign and domestic, have been identified. Detectives said they expect additional arrests are forthcoming, once additional follow-up investigations are complete.

CODE and DCIME said they “dismantled the largest, more active grow sites operated by this organization.” Investigators know the remaining locations and will dismantle these sites soon.”

The possession of small amounts of marijuana is legal for recreational use in Oregon, they noted. However, large, unlicensed marijuana operations remain illegal. Due to these operations being unregulated, they “pose dangers to the public and the environment,” the news release stated.

The Culver and Madras community and surrounding areas in Jefferson County have been struggling with severe drought conditions. Since the beginning of CODE and DCIME, investigators have found illegal marijuana grows diverted or stolen significant water from nearby homes, commercial farms, or directly from pumps connected to underground sources in the arid Central Oregon High Desert.

Additionally, Illegal marijuana farms, including this one, often use pesticides and insecticides that threaten residential water supplies and endanger the end user.