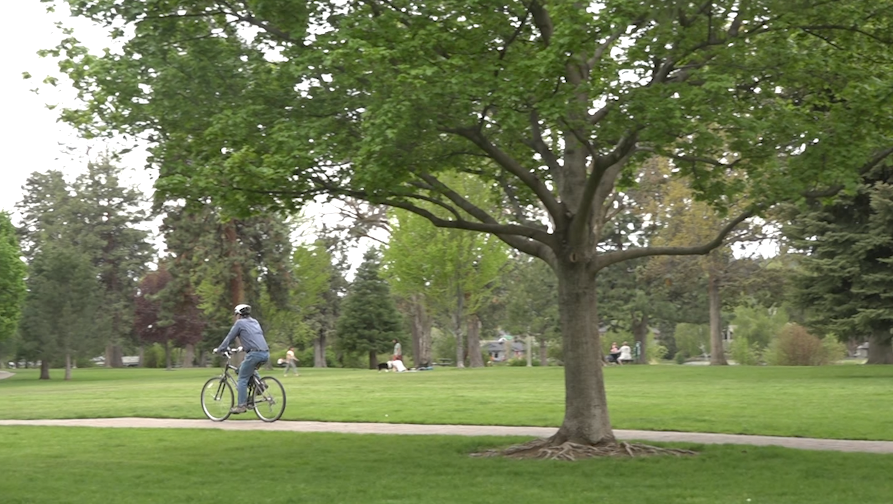 (Update: Adding video and comments from Bend Park and Recreation)

There have been e-bike complaints regarding the speed and how fast they can go. E-bikes are allowed on any Bend Park and Recreation District trail where a pedal-only bike is allowed, as long as it’s a Class 1 e-bike.

Park board Chair Ariel Mendez recalled an instance when an e-bike collided with another trail user, causing injuries.

Another person contacted NewsChannel 21 to report a fast-moving e-bike passed him at Riverbend Park, scaring him and his dog.

“The park district rules requires that users not do anything to disturb or harm other people’s enjoyment while in the parks,” Mendez said Thursday.

“So a lot of this comes down to, are you being courteous, are you being respectful? Frankly, e-bikes are so fun, if you haven’t tried one. Once you do try one, you won’t be able to stop smiling. But we have to find a way to make sure we do it in a harmonious way.”

There are three types of e-bikes. Type 1 is limited to 20 miles per hour and requires the rider to pedal to activate the motor. Type 2 allows riders to go up to 20 miles per hour with an electric motor assist without pedaling. Type 3 is faster and more powerful, going up to 28 miles per hour. The Type 2 and 3 e-bikes are not permitted on park district trails in Bend.

But some residents we encountered were supportive of the new travel mode.

“Bend has a lot of congestion, and anything we can do to kind of alleviate the congestion is great,” Jason Karn said.

“I don’t think they’re too loud by any means,” he said. “Sometimes people ride the non-pedal ones on the sidewalk. I think that’s kind of unacceptable. If you’re going to do that, you need to ride really low speeds or something like that. But, other than that, I think they’re a great new project in the modern age.”

Mendez said that ultimately, it all comes down to self-awareness.

The U-S Forest Service has banned e-bikes on trails where motorized vehicles are prohibited.

The post Bend’s new shared e-bike rules and regulations for trails and parks rely on self-awareness appeared first on KTVZ.