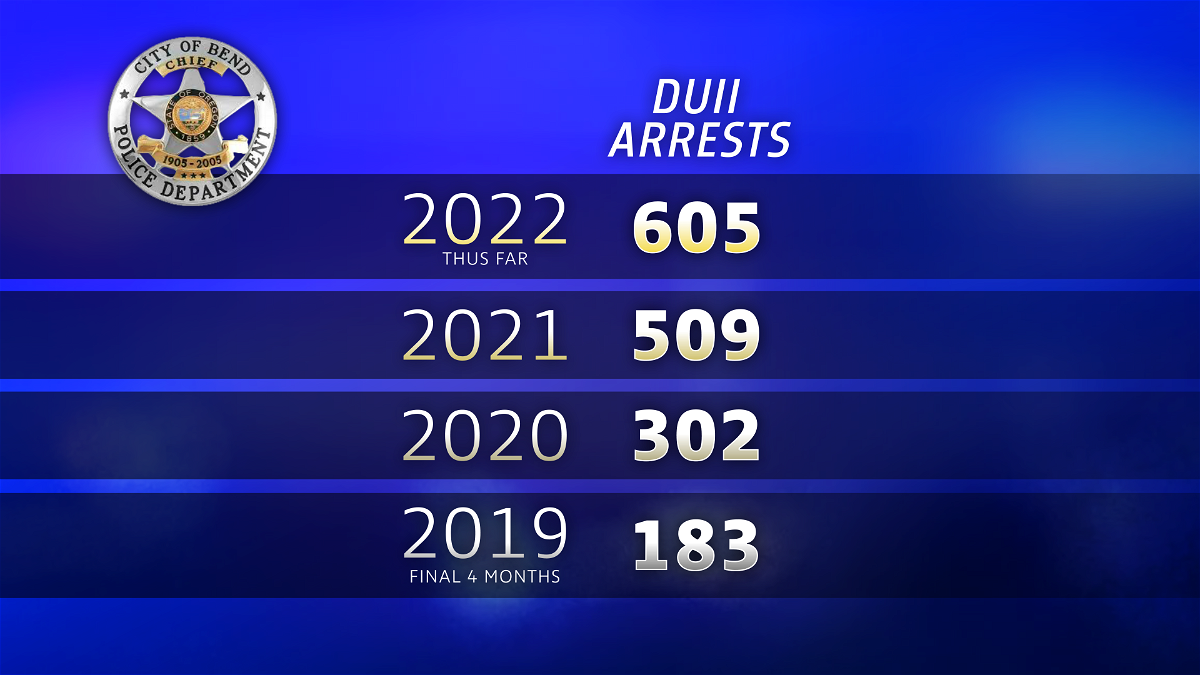 BEND, Ore. (KTVZ) – A 31-year-old Bend woman was arrested Thursday night and is facing more than a dozen charges after a fleeing, wrong-way drugged-driving crash on Highway 97 at Bend’s north end.

Officers responded to a report of an apparent DUII driver speeding through the parking lot of Sportsman’s Warehouse.

Police said Friday that DUII arrests in Bend have reached record levels, with 605 DUII driver arrests so far this year.

“Initially, when she was called in as a DUI, the person who called in said she had almost run into several vehicles,” police Communications Manager Sheila Miller said

Officers responded around 9:10 p.m. Thursday to a report of an apparent DUII driver speeding through the parking lot of Sportsmen’s Warehouse on Hunnell Road Miller said.

“You shouldn’t drive when you’ve been drinking,” Miller said. “You shouldn’t be doing illegal drugs, but if you are, don’t drive under the influence of any sort of intoxicants.”

Officers found the silver Honda CRX Del Sol parked on the east side of the building, she said. But as they approached, the driver abruptly drove away. When an officer turned on his lights and siren and tried to conduct a traffic stop, the woman sped away without headlights, driving over two parking islands.

“Out of concern for public safety,” Miller wrote, officers did not pursue the driver, who soon left the parking lot and turned northbound on Highway 97 in the southbound lanes.

Moments later, the woman, now back in the northbound lanes, crashed into the back of a Jeep Wrangler that had just turned left onto northbound Highway 97 from Cooley Road, Miller said. The Jeep was occupied by two people, and the driver was taken to St. Charles Bend with non-life-threatening injuries.

The driver of the Jeep was injured and transported to St. Charles Bend with non-life-threatening injuries, Miller said.

The driver then ran from the crash scene, Miller said, adding that officers found evidence of drug use in the car.

Using a drone, officers found the woman hiding in the bushes nearby and took her into custody with the help of a Deschutes County Sheriff’s Office K-9 team.

With nearly a month of holiday parties to go, this year is already a worrisome record for DUII arrests in Bend.

“We expect the year to finish with some of the highest numbers we’ve ever seen,” Miller said.

“When a police officer puts on their lights and sirens and asks you to pull you over, you should comply, because obviously this could have been a pretty simple case of DUI, which is a bummer,” Miller said.

“But a bigger bummer is having a really dangerous accident on the highway and ending up with 15 charges, instead of just the one DUI,” she added.

The woman was taken to St. Charles Bend for treatment, then to the county jail on charges of DUII-drugs, felony attempt to elude a police officer, reckless driving, six counts of reckless endangering, failure to perform the duties of a driver (both property damage and injury), driving with a suspended license, fourth-degree assault, second-degree criminal mischief and a felony probation violation.