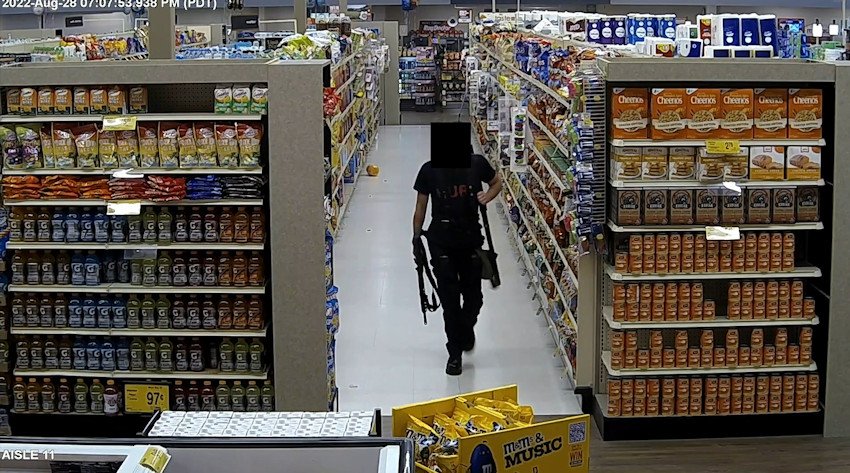 BEND, Ore. (KTVZ) — The 20-year-old Bend gunman who fired over 100 shots before and after he entered Bend’s Eastside Safeway on Sunday, August 28, killing a customer, then a store worker who hid and confronted him with a produce knife, was acting alone, police said Thursday, concluding their investigation and releasing chilling video of the attack.

In what police called a “final update” on the act of violence that rocked the Central Oregon community, Communications Manager Sheila Miller wrote that as of now, “Bend Police have found no evidence that anyone other than the suspect was involved in” the assault. Deschutes County District Attorney John Hummel also told NewsChannel 21 there is “zero evidence of other people involved” in the shooting.

Here is the rest of the police announcement, in full, and a link (WITH WARNING) to where the video and reports can be found. NewsChannel 21’s Bola Gbadebo will have more in her report at 5 p.m.

“In the days following the Aug. 28 incident at Safeway, our Department received dozens of public records requests for video and reports related to the case. We denied those requests because it was an active investigation.

“Now that we are no longer actively investigating the case, we are releasing our department’s 398 pages of reports and a video used in our investigation. The Bend Police Department understands the public interest in this incident, and this release is meant to satisfy that interest and to demonstrate the accuracy of information previously released by our Department.

“You can access these reports and video by going to https://www.bendoregon.gov/government/departments/police/records-division, then clicking on “Document Releases” under the Media Records Releases section. The video and reports are in a folder labeled “Released 12_01_2022 at 1000 Safeway Shooting Reports and Video.”

“The video was created with help from Major Incident Team partners. It is the product of investigative work that stitches together surveillance videos from a Ring camera, Costco, Big Lots and Safeway to provide a detailed account of the suspect’s path from the Fox Hollow Apartments into Safeway, where he shot and killed shopper Glenn Bennett and employee Donald Surrett Jr. before dying by suicide.

“At the bottom of this release, you’ll find a detailed timeline to help interpret the video.

“Reports show that after our on-duty officers’ initial response to the scene, the entire Central Oregon Emergency Response Team, as well as approximately 30 off-duty members of the Bend Police Department, responded to the scene.

“Those responding units assisted with everything from evidence collection and investigation to scene security, witness interviews, non-related patrol calls and response to additional reports of threats to the community in the aftermath of the Safeway shooting, all of which were ultimately unfounded. We are thankful to our neighboring agencies for assisting the Bend Police Department on this case.

“As previously noted, this was an extremely large, involved crime scene. Law enforcement interviewed and contacted more than 80 people – witnesses or those otherwise related to the incident. Our Department collected at least 173 pieces of evidence, as well as at least 90 videos and sets of photos supporting our investigation.

“In preparation for the release of this information, our Department provided advance notice to both Safeway management and the Deschutes County District Attorney’s Office Victims Assistance, who communicated with victims’ families to ensure they were aware of this forthcoming release.

“The Community Assistance Center will provide support to anyone who is struggling and would like additional support. One-on-one or small group support will be available Friday, Dec. 2 through Sunday, Dec. 4, from 3 p.m. to 7 p.m. at the Crisis Stabilization Center, 63311 NE Jamison St., in Bend. The Community Assistance Center is a partnership between Deschutes County Health Services, the DA Victims Assistance Program, and St. Charles Health System. Spanish translation services will be available. Please note the Stabilization Center is closed to media.

“In addition, here are some mental health resources for those who may find the information contained in the reports and video upsetting: Deschutes County Mental Health Recommended Resources | Deschutes County Oregon“

00:04: View switches to depict three cameras. The lower lefthand camera is Ring camera surveillance from a Fox Hollow apartment, upper righthand camera is from Costco facing east (and is very dirty, making viewing difficult), and the main view is from the rear dock of Costco.

00:53-01:34: Suspect can be seen walking from Fox Hollow Apartments through the parking lot between Costco and Old Navy. Old Navy does not have surveillance cameras.

01:43: Suspect is no longer visible on the east-facing Costco camera.

03:18-03:27: Smoke from suspect’s rounds is visible in the west entrance as suspect enters Safeway.

03:36: Suspect shoots Glenn Bennett near the west entry of Safeway.

04:08: View changes to show west-facing view of the rear of the store.

04:08-04:10: Shopper can be seen tripping and falling to the ground in the meat department as suspect moves east near the rear of the store.

04:11: View changes to show additional view of the rear of the store, including produce section. Safeway employee Donald Surrett can be seen crouching behind an endcap in front of a melon display.

04:14-04:25: Suspect approaches shopper in the meat department, throws his glasses, then interacts with shopper before shooting the floor nearby.

04:29: View switches to show two views of the produce section (lower lefthand is a north-facing camera, main view is a west-facing camera).

04:47: An additional view of the east entrance is added to the video.

04:50: Two Bend Police officers can be seen entering the east Safeway entrance as the suspect moves through the produce section.

04:56: Officers react to the sound of the gunshot and run toward the produce section.