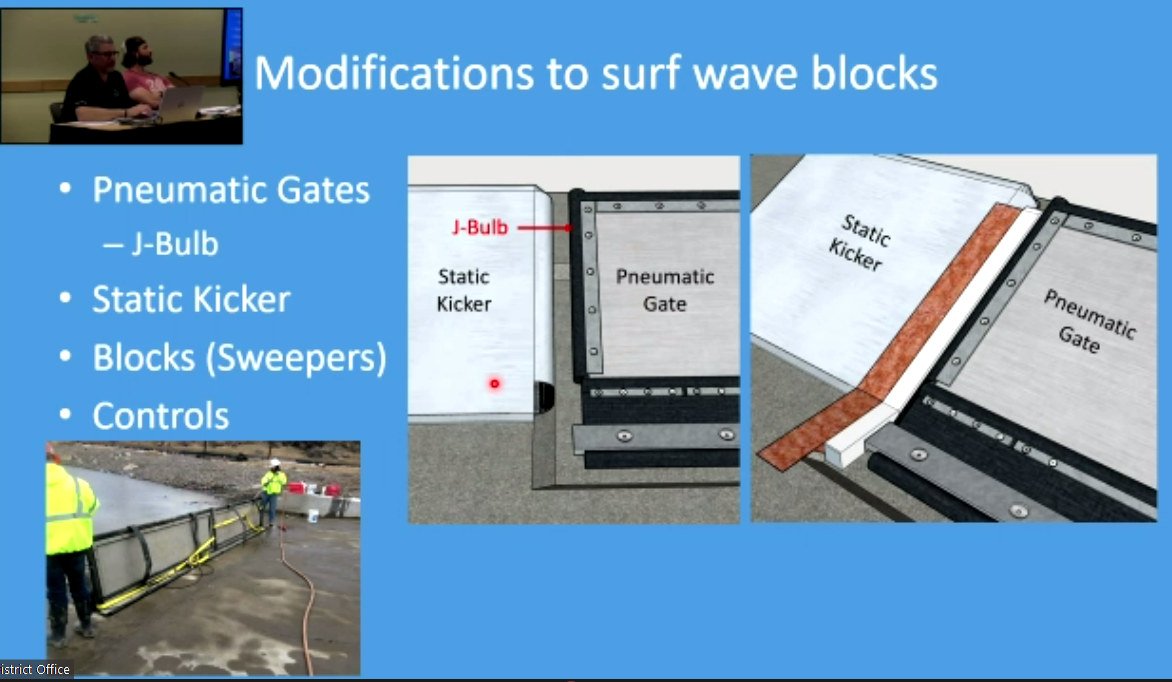 BEND, Ore. (KTVZ) — A combination of low spring river levels, a tangled quick-release leash and small gaps between parts of the Bend Whitewater Park’s “surf wave” contributed to the death of a teen surfer this spring, investigators said Tuesday as they outlined changes made and planned to reduce the risk of a repeat tragedy.

The April 30 incident that killed Bend 17-year-old Ben Murphy prompted closure of that channel of the whitewater park pending an extensive investigation of what went wrong and a variety of steps are taken to reduce the risk – though all involved told the Bend Park and Rec Board it’s impossible to completely eliminate that risk in a turbulent whitewater environment.

Various structural changes, including addition of so-called “sweepers,” have already been made to eliminate the gaps between the pneumatic gates and bladders that control the shape of the wave and the “static kickers” added to help provide optimum conditions.

Deputy Executive Director Michelle Healy said Murphy’s recovered quick-release leash was broken off and “evidence showed it was very stretched, which indicated it probably was under high stress. Throughout the length is black rubber, likely from the protective black around the gates – that’s our best estimate where that came from.”

“It’s likely he got tangled,” she said, “so the combination between the lower water levels, the space that exists between those gates and the leash he was wearing resulted in the accident we saw that day.”

The park board agreed to the proposed changes, including barring the use of leashes in the park, though several surfers later during the visitors’ section told the board they believed the leash wasn’t a key factor in the tragedy — that his foot was trapped — and that losing the board without a leash will create more possible dangers as they go downriver.

Park board member Nathan Hovekamp later made the motion, approved 4-0, to accept the proposed recommendations and changes, though he and others said they want to closely monitor the situation and discuss how the no-leash issue, among other changes, have worked in a late-summer revisiting by the board.

Justin Rae, president of the Bend Paddle Trail Alliance, which has been involved in the investigation and planned changes, noted “there are no standards for river surfing out there,” which he said “is a fairly new sport.” But the goal is amid varied skill sets “how to keep it as safe as possible in a whitewater environment.”

A surfing equipment vendor said breakaway leashes could be required to make sure they don’t play a role; a surfer who helped pulled the teen from the water said his foot got stuck and the leash wasn’t why he died.

Personal floatation devices and helmets designed for whitewater use will be strongly recommended, with signs emphasizing them as standard river surfing gear and “loaners” will be made available through a partnership between the park district, the Bend Paddle Trail Alliance, Tumalo Creek Kayak & Canoe and Cubicle.

The park district also will look at upgrading the air compressor chamber so adjustments to the gates can be made more quickly.

Other suggestions from the visitors included having a BPRD lifeguard on scene. One surfer claimed many were well aware of the gaps in the surf wave segments and believed it would eventually kill someone.
“This is not hindsight 20/20 — it’s negligence, in my opinion,” he said.

But Healy said after a break that the whitewater park wasn’t designed for leash use and a sign warning against their use has been in place since the beginning. “Maybe technology will change,” she acknowledged.

Hovekamp said he respected the surfers’ comments but that he supported the changes as proposed and glad to hear the evaluation will continue after the planned surf wave reopening on June 18.

NewsChannel 21’s Kelsey McGee was at the meeting and will have a report First at Ten on Fox. Here are the park district’s news release and the documents and presentations from the meeting.