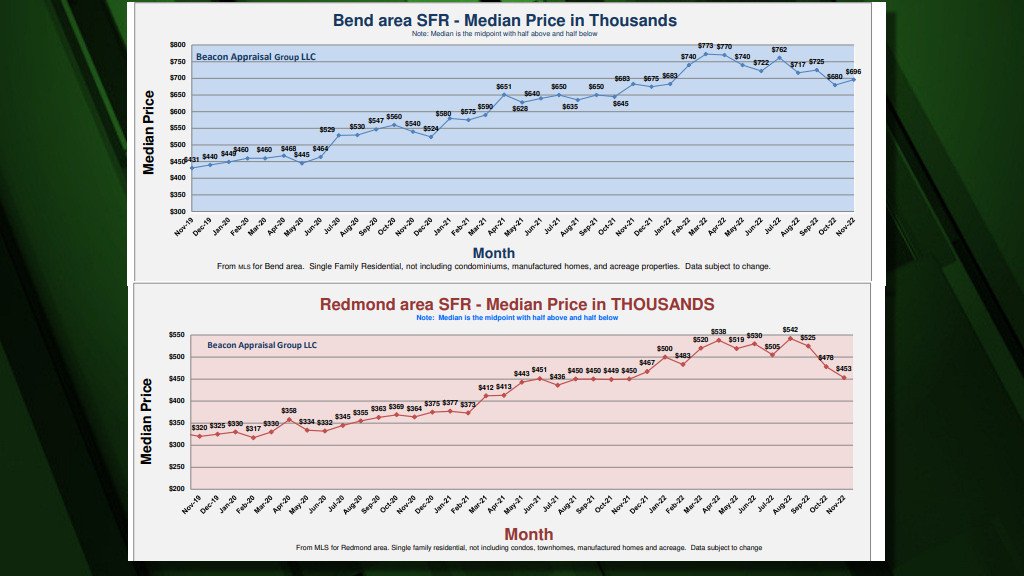 REDMOND, Ore. (KTVZ) – Central Oregon’s real estate market has been on a bit of a roller-coaster this year, and the November figures out Thursday from Redmond’s Beacon Appraisal Group shows the impacts of inflation, recession fears, up-and-down mortgage interest rates and other national and local factors.

As is fairly typical when winter approaches, the number of sales continues to decline, falling from a spring peak of 218 to 13 last month, but the days on market for sold properties also dropped from a recent high of 28 to 18 days. Building permits usually drop in the winter and are down to 24 for November, while the months of supply on the market also declined, from 2 to 1.5 months.

Redmond’s median home sales prices, meanwhile, continued its decline from the record $542,000 seen this summer, falling another $25,000 in November, to $453,000, close to the level of a year ago. There were 60 home sales, 13 fewer than in October but still more than earlier in the fall.

The days on market for sold Redmond homes rose to a recent record of 35 days, but building permits also saw a sizable rise, from 10 to 21. The months of inventory held steady at two months for a third straight month.