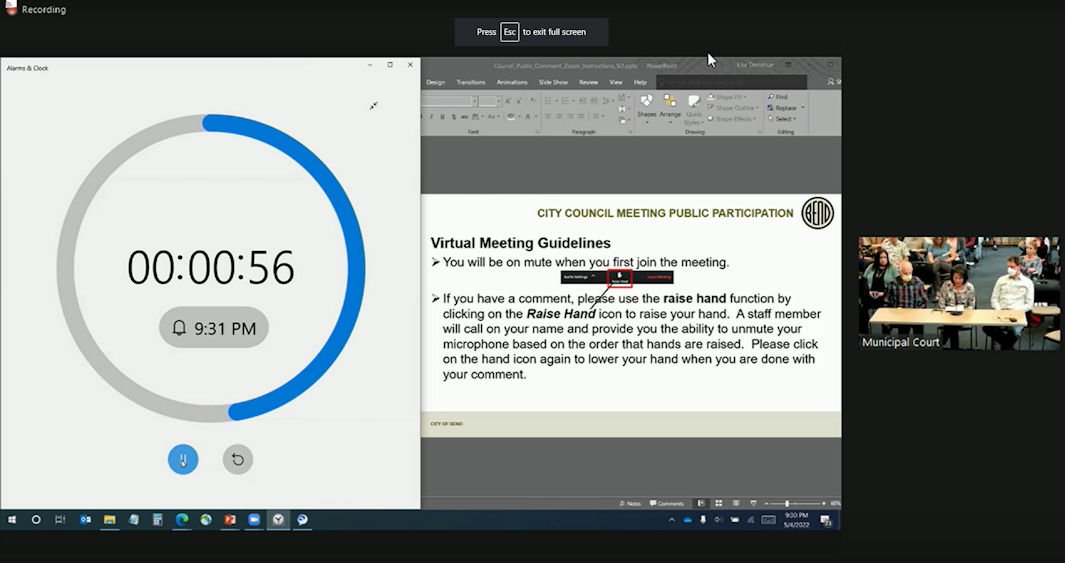 (Update: Adding video, council discussion and comments from the hearing)

BEND, Ore. (KTVZ) – The Bend City Council heard plenty of testimony Wednesday night at the Bend Municipal Court on proposed changes to homeless shelter codes, and then in late-night deliberations agreed to changes in some of the most controversial elements.

It was a long-awaited hearing, and emotions ran strong.

The meeting was moved to the court chambers because of the expected large crowd that would fill the small council chambers to overflowing, a common scene over the years. But it also happened to be the first council hearing in more than two years — since the pandemic began — when the public was invited to speak in person and not just online in a livestream. (Actually, it was a hybrid of both, alternating between in-person and call-in speakers.)

The public comments didn’t start until 8:45 p.m. and there were 30 people who signed up to testify. Many in the audience applauded what others said.

“I’m here to voice my opposition to the shelter codes proposed tonight,” Lisa Baker. “We showed up to the meeting on these code changes, we wrote letters with our concerns, we begged our homes and schools be protected. We asked for more oversight and a path for correcting issues with neighbors using hardship shelter permits. We ask that we, the housed residents of Bend, be considered in the changes to the proposed codes.”

Kate Martin said, “What do we do with the homeless that refuse to use the shelters, such as they occurred nightly on 2nd Street  because they could not use (drugs) or drink on site? Second, how to shut down on more oncoming homeless coming to bend so we don’t wind up shelter to shelter and become a welfare city?”

One man upset by the delays in waiting to testify got a bit rowdy and was spoken to by police. Mayor Sally Russell tried to calm the people down and reminded them several times to be respectful.

The city had prepped for a possible continued hearing Thursday evening, if it went too late. But even though public testimony didn’t begin until 8:45, it was over by 10:20, so councilors then dove into the issues raised, as well as their own, and proposed some changes staff will return with wording on in two weeks for a possible first reading.

One is to require 24-hour on-site management for temporary shelters, dropping an on-call option, although it was noted that service providers could decide some shelter residents are capable of responsibly playing that role as designated on-site managers, presumably for overnight or weekend hours.

Councilors also appeared ready to drop a controversial element known as “hardship housing,” (except for the existing city code related to medical conditions), after many residents expressed worries it could turn into RVs and tents in numerous neighborhood driveways and streets. City Manager Eric King also noted that the city had made provisions for hardship housing for 2020 wildfire evacuees, but none were requested.

They also agreed to add neighborhood associations as part of the notification process. And since the allowance of temporary outdoor shelters in residential areas was narrowed to property associated with public institutions, such as churches, councilors asked staff to look at how certain nonprofits might also be included, such as Dawn’s House, a drug and alcohol rehabilitation facility.

Councilor Barb Campbell asked several questions raised repeatedly in the public testimony and recent months: What about the homeless people who refuse to go to a shelter?

The answer is what’s bound to be the next chapter of the debate: a camping ordinance aimed at limiting, if not eliminating the street camps that have sparked many issues and concerns among nearby businesses and others. Some have been cleared by the city under a process that identifies health and safety hazards in city rights of way, but that just moves the problem to other familiar locations.

King said the staff has scheduled a council work session June 15 to work on the possible camping ordinance language and the issues involved.

Campbell said, “Our intention is to write a camping ordinance. Nobody is happy with the status quo. I’m not happy with people camping on the streets in my city. I look forward to the time when it’s easier for police to identify people who are just trying to cause trouble.”

The shelter code process has been under way for many months, starting with a sounding board stakeholder group of citizens, then hearings before the Bend Planning Commission, which heard many objections from worried residents and made some changes in the code language before passing it on to the council for review.

With a staff presentation, followed by reports from current service providers of how they operate and how their rules work, public testimony finally began. It got testy at times, and Mayor Sally Russell warned she might call a recess at one point, as numerous speakers drew applause.

The main focus – and target of criticism – was the idea of allowing low-barrier shelters, such as tents, in neighborhoods, which numerous speakers said would pose an unacceptable danger to their areas.

Another common thread was that the city should mandate 24/7 on-site management – not on-call – for any such shelters (which councilors addressed later).

Former Bend police chief Jim Porter, who now is a service provider for a planned homeless village, noted the fear expressed by so many, but also said that under the current rules, “Every neighborhood in Bend has unmanaged campers in it” — and the goal is to make managed locations that work.

Porter said there are many examples around the region of successful managed camps, with strong policies and strongly enforced codes of conduct. “I can’t say I disagree with the 24/7 on-site management,” he added.

“We need to manage, get our hands around this situation,” he said. “We can no longer ignore it.”

The Bend Humanity Coalition, which has opposed the shelter code proposal and urged the city to do more to clear homeless off the streets, sent out an email hours before the hearing to note that Councilor Megan Perkins had used a figure at the last meeting’s update on homeless issue — that the city plans to spend a total of $35,000 for each homeless person counted as living in the city, mostly from federal and state grant funds. There were roughly 600 homeless people within Bend city limits.

The group said in its press release: “Our public safety officers’ time is valuable, and the cost of responding to these calls is not included in the City’s accounting. In other words, the City is spending considerably more than $35,000 per homeless person.”

“The proposal does not legalize unsanctioned camps on public rights-of-way, and does not allow unmanaged camps on private property,” Senior Planner Pauline Hardie said in an issue summary. “The development of shelters under the proposed code will only occur based on applications from property owners and shelter providers, along with the regulatory review and approval or denial of applications under those code provisions.

Councilors could hold a “first reading,” meaning initial approval at the night’s end on the proposed code changes, but the city also has posted tentatively notice a possible continuation Thursday at 6 p.m., should the hearing run late. And there’s quite likely going to be council discussion and debate about possible changes to the codes, meaning any decision could come at meetings in future weeks.

The mayor early on already warned against audience applauding, as they did for a business owner fearing for her safety due to a nearby camp and another public comment regarding some councilors not standing during the Pledge of Allegiance.

Here’s Councilor Megan Perkins houseless update Wednesday evening, including a shifting of about 45 homeless due to renovations at current facilities:

“I wanted to start tonight talking about the Rainbow Motel, an important topic due to our earlier conversation with the Bend Central District Business Association and in relation to houselessness.

We are a committed redevelopment partner for the Core Area and Bend Central District.

I want to finish by focusing again on the strategy for addressing unsanctioned camps in our community.