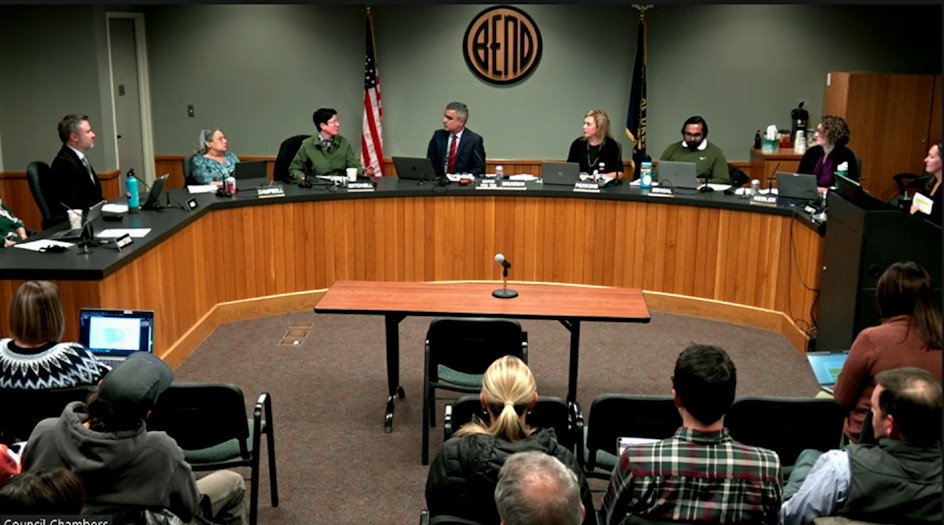 BEND, Ore. (KTVZ) – After hearing some criticism from the Central Oregon Association of Realtors and a mix of views during a public hearing, Bend city councilors moved ahead Wednesday night with plans to enact a required Home Energy Score preparation when homes are sold, starting next July 1.

In a 6-0 vote (with departing Mayor Gena Goodman-Campbell absent) councilors agreed with those who see the requirement for such a score, to be prepared at an expected cost of $150 to $300, as one key in advancing goals to tackle climate change. There will be assistance to pay the cost for those who qualify.

The Home Energy Score was developed by the U.S. Department of Energy and has been adopted by cities around the state and country as a way to standardize and recognize a home’s energy use, along with recommendations for improvements that would reduce those monthly bills.

There would be a potential fine of up to $750 (Class A violation), but City Manager Eric King – who got a strong council review and a 9% raise Wednesday night – said the goal is to “always seek compliance. We’re not looking to levy fines.”

Tyler Neese, government affairs director for the Realtors association, said the group supports a voluntary incentive and the Home Energy Score, but is concerned about making it mandator and the impact on affordability and potential delays in the process.

Neese said Realtors have worked with city officials in Ashland, Eugene and Corvallis in cooperative fashion on adopting such scores, but “it should be a choice, not a requirement.”

Before the vote, Mayor Pro Tem Anthony Broadman called it a good “very small step” but added, “I don’t think it’s far enough. … I hope to see a lot more steps taken in this community to mitigate the climate crisis.”

In other action, a possible halt to Costco’s plans to move to a new, larger site on Bend’s north end apparently has been averted, as councilors gave the nod to a revised master plan for the 52-acre Gateway North site by Cooley Road, Robal Lane and Highway 20.

Councilors at their last meeting balked at the large “deviation” they site developers had sought for hundreds more parking spaces and fewer bike-parking spaces than required for the site, which also would house multi-unit housing, some deed-restricted for more affordable housing.

Other changes include a “mobility hub” for transit along a new local road through the site and more trees in the parking area.

“We listened to your concerns,” said Tia Lewis, the attorney for Powell Powell Development Group. Councilors agreed, saying the changes helped the project mitigate its impact and meet the city code requirements.

Speaking of parking, councilors opened, then continued to Jan. 18 a hearing on a possible removal of minimum parking requirements for new developments, part of the state Land Conservation and Development Commission’s new Climate Friendly and Equitable Communities rules. A lawsuit filed by several cities seeking to block those rules prompted the continuation.

Councilors also approved a $2.3 million contract with Taylor NW to build an extension of Purcell Boulevard, which currently is missing about 1,000 feet between Courtney Drive and Holiday Avenue, as the city undertakes improvements at the intersection of Purcell and Neff Road.

And councilors approved a $9.6 million pre-construction and design contract with Kirby Nagelhout Construction for the city’s Juniper Ridge Public Works Campus project, which will bring several city departments spread among various sites together in one location.