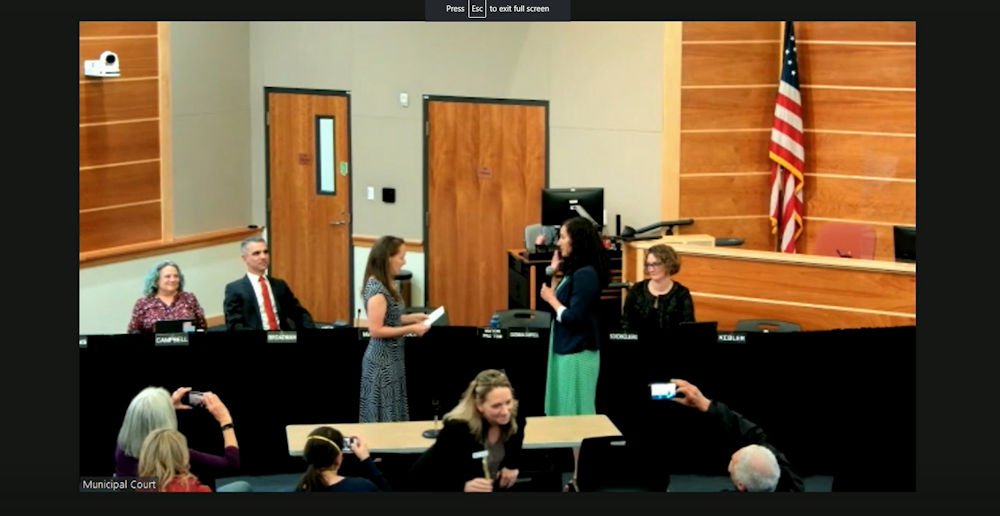 City seeks applicants for 2 council vacancies; council has 30 days to fill or they stay open until fall election

As with many council meetings lately, things got testy if not contentious early on, with some supportive and thanking the mayor and Schenkelberg for their work, and others critical.

There also was another round of citizen comments critical of what they see as an effort to put homeless who use drugs or are otherwise unsafe in residential areas.

Here’s the city’s outline of what transpired and the process to fill the vacancies:

Bend City Councilors declared two Council vacancies at their May 18 meeting, triggering a selection process that is open to community members interested in being appointed to the Bend City Council for the remainder of this year. In separate announcements, Mayor Sally Russell and Councilor Rita Schenkelberg publicized that they both were resigning and that the May 18 Council meeting would be their final meeting.

The person elected by voters into Schenkelberg’s seat will serve out the remaining two years of Schenkelberg’s term instead of a typical four-year term.

Community members interested in being appointed can apply at www.bendoregon.gov/council-application found at www.bendoregon.gov/citycouncil between May 19 and June 1. Appointees must be registered to vote in Oregon and must have resided in the city continuously during the twelve months immediately preceding the appointment.

If more than 10 people apply for the vacancies, a subcommittee of councilors (Anthony Broadman, Melanie Kebler and Megan Perkins) will convene to review the applications and suggest candidates for interviews. If fewer than 10 people apply, the whole Council will interview all applicants. Councilors will hold special public meetings in early June to conduct interviews. (Watch www.bendoregon.gov/councilagenda for meeting information.)

For more detail, section 21 of the Bend Charter and section 9 of the City Council Rules explain the requirements associated with the process to fill vacancies.

More information about the 2022 Council elections can be found here.

Here is the city, and Councilor Megan Perkins’ summary of the shelter code, the changes:

Councilors made the first of two votes needed to approve development code changes that would provide options for various types of shelters to be built in most zoning districts in Bend.

Shelters can provide a bridge for houseless community members until they can get into more stable or permanent housing. Shelters are part of the City Council’s comprehensive strategy to provide safe housing options for people.

Here are Councilor Megan Perkins comments summarizing the shelter code update, prior to the vote:

It has been a long process to get to the point we are at tonight. Councilors will make the first of two votes required pass shelter code changes. The proposed changes to the Bend Development Code would allow shelters for unhoused community members to be developed in most zoning districts in Bend.

In response to feedback we heard from the community, Planning Commission and Neighborhood Leadership Alliance, Councilors asked City staff to make three changes to the proposed code, which have been incorporated into the proposal we are considering this evening:

As part of its overall strategy to address houselessness, the City will next work on comprehensive Municipal Code provisions to regulate camping and sleeping in public places.

Introducing a new code related to unsanctioned camping after the shelter code changes currently being discussed is not coincidental timing. Creating additional shelter options lays the groundwork for a code that regulates where, when and how individuals can camp or sleep in public places.

I do want to point out that State law says any City regulations on sitting, lying, sleeping or keeping warm and dry outdoors on public property must be objectively reasonable as to time, place and manner for people experiencing homelessness.

While this may not allow every city to prohibit all camping in public places at all times, the City will be considering its options under the law as the project proceeds.

The City Council expects to start discussing an unsanctioned camping code this summer, following our decisions regarding the proposed shelter code.

You can find this information on City Council agendas going forward. (www.bendoregon.gov/councilagenda)

Thank you to all that gave feedback, asked questions and brought ideas to this process. We look forward to engaging you further as we move on to the next piece of this comprehensive work.

There were few small issues on this night. They began a work session with a return to another controversy: short-term rentals, and whether to more strictly limit their placement (a larger density buffer) and require proof its use for that at least once a year.

Then they got an update on the water situation, hearing about recent declines in groundwater levels in the region, due to climate trends and years of drought.

Each councilor explained why they were voting for the shelter codes, with Broadman noting that it’s a “land use decision” and that “it’s important to be doing something to help people and places that routinely graduate people out of homelessness.”

Councilor Barb Campbell said, “It hurts my heart to hear some of the comments” people have made, but most she talks to “say they are human beings, and the situation we have now is intolerable.”

She said it’s clear why so many people are afraid of living next to something that grows to be like the homeless camps on Hunnell Road and Second Street.

“That is not what we are trying to create,” she said. “Those places represent the problem we’re trying to solve.” And she spoke of her own personal issues – “I’m an alcoholic,” and how she had help find “a place for me in rehab.”

The city-ODOT intergovernmental agreement was approved 6-1, with Broadman opposed, saying not enough is in the plans yet to show it will be truly multi-modal: “I want a better project.” But Region 4 Manager Gary Farnsworth said the work to make the new Third Street extension better will continue, and Campbell acknowledged while “it’s not perfect,” the plans and partnership are a big step forward: “To me, it represents a sea change for ODOT.”

The departure of Russell and Schenkelberg also brought tears from Campbell and heartfelt words from several colleagues.

When it came time to choose an interim mayor, Campbell nominated Goodman Campbell, seconded by Broadman, and no one else was nominated. Colleague Melanie Kebler announced her run for mayor a month ago – and was endorsed by five colleagues, hours before Russell’s initial announcement that she would not run for re-election. Former councilor Chris Piper also has declared he will run for mayor this fall.

Goodman Campbell said before her swearing in ended the evening, “It’s going to look different, having a mayor who is a mother of a small child and has a full-time job. Change is a constant.”

She said the city is “obviously facing some daunting challenges. We have laid out an inspiring work plan.”