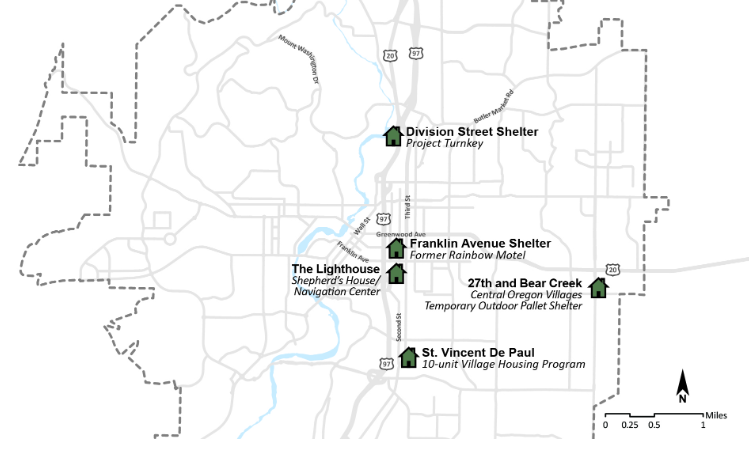 The Rainbow Motel on NE Franklin Avenue was purchased for current use as a homeless shelter and has proved to be successful for short-term and long-term needs. With the success of the Rainbow Motel, councilors had the opportunity to purchase property next door.

A second purchase, also approved unanimously, was for about an acre of land on the south end of town, between Les Schwab Tires and the southbound onramp to Highway 97 near Murphy Road.

Councilor Melanie Kebler made this statement and motion:

“Earlier this year, Council acquired the former Rainbow Motel. The purchase met both short-term and long-term community needs, including potential use in the near-term as a temporary shelter, and ultimately to support Core Area redevelopment goals, including affordable housing, civic plaza, or other public uses, such as a new City Hall.

“The City is continuing to identify strategic acquisitions in the Core Area that will serve these same goals, and is a committed partner to the redevelopment of the Core Area and Bend Central District.

“In the near term, the property will be leased back to the current occupant, Paulson’s Floor Coverings, for one year.

“I move to authorize the City Manager to negotiate and enter into an assignment agreement, in a form approved by the City Attorney, with Taylor Development, LLC to assume Taylor Development, LLC’s interest under its Sales Agreement with EDIM, LLC for the purchase of 184 NE Franklin Avenue (Tax Lot numbers ending in 4500, 4600, 4700) in the amount of 2.9 million and one dollar plus $10,050.00 in administrative costs, as well as to direct staff to take whatever steps are necessary under the Sales Agreement to Close the purchase without further Council approval, including but not limited to entering into a lease with EDIM, LLC, to occupy 184 NE Franklin Avenue for no less than one year after close, with rent payments to the City equal to $13,196.00 per month.”

“Tonight, Council has the opportunity to begin the process of purchasing a parcel of land in SE Bend from ODOT. This is a parcel between Les Schwab Tires and the southbound onramp to Highway 97 near Murphy Road. ODOT is taking this property through it surplus property process, and we expect them to make it available for the City to purchase in the coming weeks or months.

“Although we do not have the ability to put this parcel to use right now, I believe this is an opportunity for the City to take a tangible step towards securing property to support our housing goals. The most likely use for this property, over time, is as a respite for unhoused community members seeking safe parking or a managed outdoor shelter.

“Prior to any final decision being made on how to use the land, the City intends to involve neighbors in the discussion. Those will likely be conversations for the next Council to have in 2023. For now, we just want to acquire the land so we have it for use later.

“The property will be subject to a “reversionary clause” which will require the City to transfer the property back to ODOT, if the property is needed for a proposed interchange between Murphy Road and Highway 97, anticipated to be at least three years from now. We may have the opportunity to take full ownership of this property, if it is not needed for the Murphy interchange.

“I move to authorize the City Manager to enter into an agreement, in a form approved by the City Attorney, with the Oregon Department of Transportation for the purchase of approximately 1.66 acres located at 61071 HWY 97, based on the appraised value of $45,000, subject to a reversionary interest in ODOT, and to take all steps necessary to finalize the purchase without further action from Council.”

NewsChannel 21’s Kelsey McGee is meeting with Kebler to learn more about the future plans. Her report will be on NewsChannel 21 Fox @ 4.