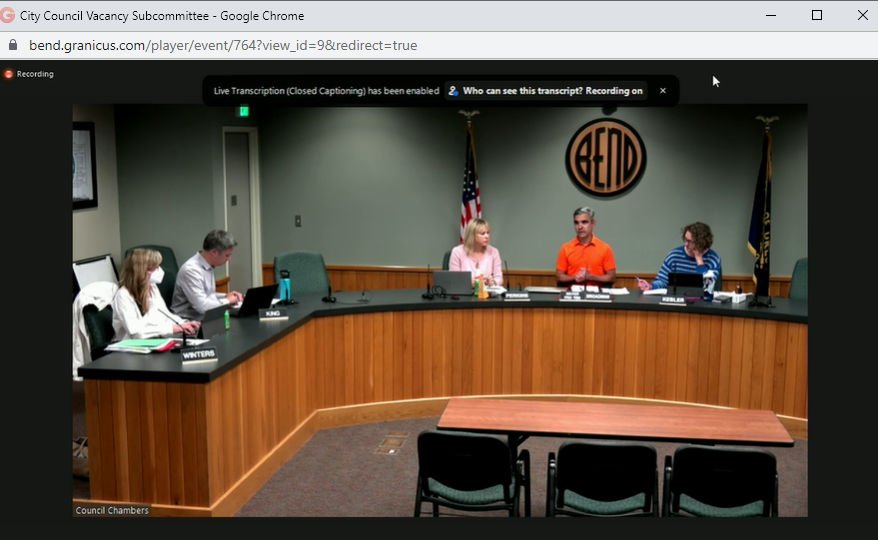 List of 36 applicants narrowed to 10; interviews planned next week amid charter’s tight timeline

BEND, Ore. (KTVZ) – A subcommittee of three Bend city councilors on Friday made fairly quick work of narrowing a list of 36 applicants for two vacant council seats to 10; each reviewed the stack of applications on their own and came up with their own lists, which overlapped to a large degree.

Mayor Pro Tem Anthony Broadman and councilors Melanie Kebler and Megan Perkins met with City Manager Eric King and City Attorney Mary Winters in a livestreamed City Hall session that took about an hour to come up with a recommended candidate list to send to the “full” council of five (including Mayor Genna Goodman-Campbell and colleague Barb Campbell), who will meet next Tuesday at 5 to review the list and decide what questions to ask.

For time constraints, the panel also said it would recommend the full council narrow the list of 10 to 6-8 for interviews scheduled for next Thursday evening (and the following Monday, if needed).

One key criteria in narrowing the list for the three councilors was that the interim councilors, who will fill Sally Russell’s and Rita Schenkelberg’s seats through the end of the year, are not interested in running for election this fall.

Broadman noted and all were well aware of the issues that rose with the appointment of former councilor Chris Piper in recent years, and a perception that the council was “putting its thumb on the scale,” rather than letting the public decide who fills council seats.

“I don’t want anything to interfere with the will of voters in the city,” Broadman said, adding that he also believes those who have served on city committees should be favored for their experience and willingness to serve the city.

Under the recently revised city charter rules for filling vacancies, the council only has until June 15, 30 days after the vacancies arose, to fill the two seats, or they will remain open until the November election.

Perkins said because of the short timeframe they’d serve, the replacements need to be ready to get to work immediately. She also said she’d like to see people chosen who have similar values to the two councilors they are replacing,

Kebler said she, to,o was leaning toward choosing those not intending to run this fall but who “can hit the ground running” and won’t be trying to make major changes to the council’s agreed-upon goals and work plan. Also important are a diversity of work/life experience.

Broadman said another factor he weighed was geographic diversity throughout the community, adding that he thinks “we have a pretty good mix now.” But he also said personally, “I don’t think we should be filling positions this close to the election, but I also understand the charter requires this process.”

As they each reviewed the applications, all three had named Brittany Brown, Capell, Jorgensen, Lynch, Mitchell, Seghal and Stiegler on their lists. The other three they added were on two councilors’ lists.

Councilors also will be reviewing what questions to ask, and the finalists will be asked to answer in writing first, so councilors can review those answers and ask follow-up questions.

Here’s the full list of applicants as released by the city; the 190-page packet of all applications can be reviewed in a link included on Friday’s agenda: https://bend.granicus.com/GeneratedAgendaViewer.php?view_id=9&event_id=764.