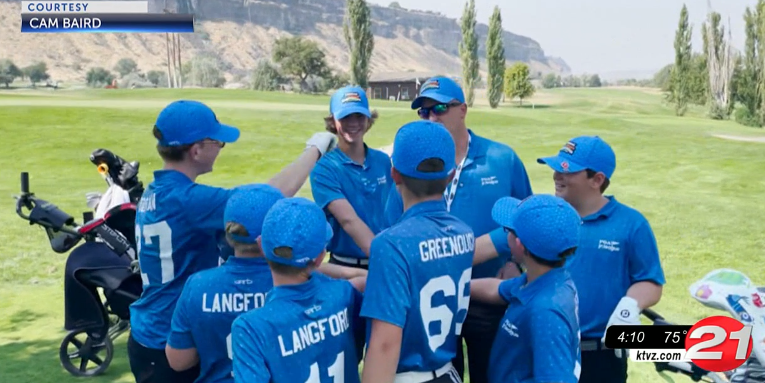 The golfers are on the Bend Bombers, an all star team made up of ten to thirteen year olds from Central Oregon.

They lost to the reigning national champions from Utah, in a tie breaker.

“We knew from the beginning it was going to be really tough to beat that team, they won the nationals last year,” Baird said.

The competition takes multiple pairs from each team.

The Bombers pairs tied the Thanksgiving Point all stars from Utah at 6 points.

“If we could get some of those puts to drop, we could have had it,” Baird said, while taking some practice swings at Tetherow Golf Course.

Baird said he and his team were happy to even make the finals, qualifying as a second seed and beating a Washington team in the semis.

Baird and his partner Bryden Ditty matched up against the son and nephew of PGA star Tony Finau.

After getting a picture, of course, Baird kept it professional.

“That was awesome but at the end of the day Tony Finau is just another guy who happens to be really good at golf,” Baird said with a pause. “It was pretty cool playing with him though.”

Baird and Ditty ultimately out played the Finau duo, but the Bombers as a team came up short.

However, coach Ryan Smith said it’ll inspire his boys for next year.

“We’ll lose a couple players but we have so many great junior golfers in Central Oregon I think we’ll be back stronger than ever next year,” Smith said.

“It was heartbreaking that we lost but we did awesome and I think we can win it next year,” Baird said.

Last year, the bombers were the first ever team from Bend to make regionals.

Smith said they weren’t really competitive, and just a little too young and inexperienced.

He feels this year’s result is a positive step forward.