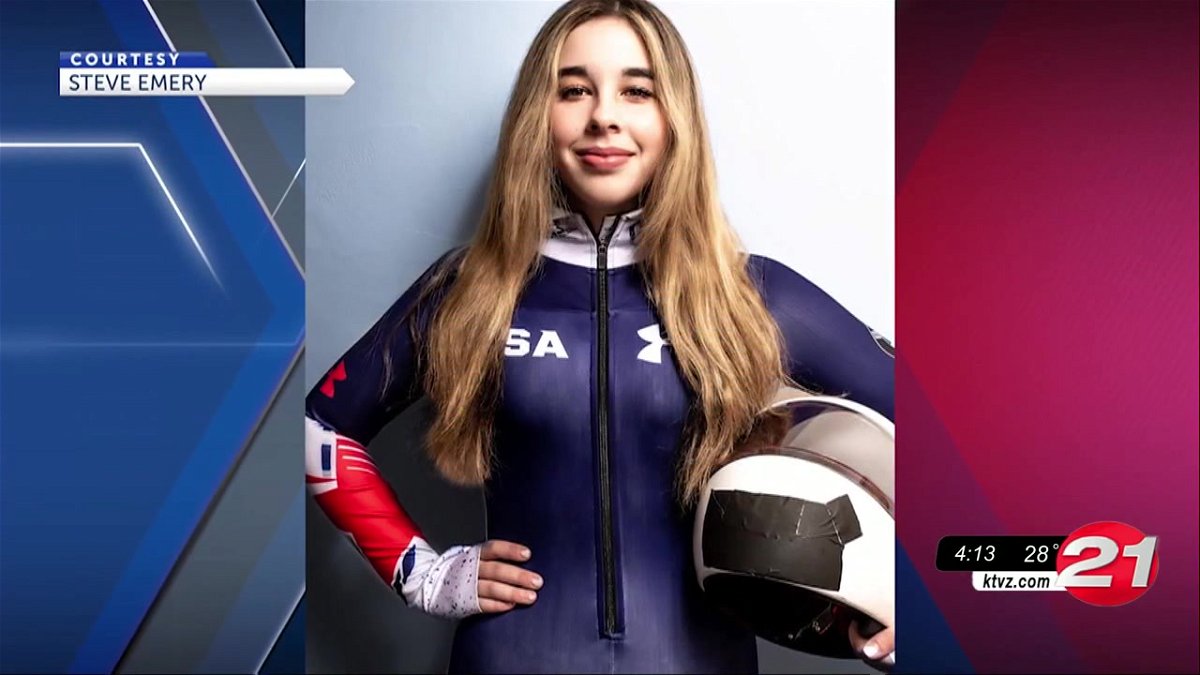 (Update: adding video, comments from skeleton athlete and her father)

BEND, Ore. (KTVZ) — A Caldera high school student is training for the next Youth Winter Olympics, in the very fast, risky winter sport of skeleton.

Bend has become known for its extreme and Olympic sport athletes.

Whether it’s skiing, snowboarding, rock climbing or mountain biking, Central Oregon athletes have put themselves on the international map.

For 15-year-old Biancha Emery, she’s doing the same for skeleton — at a record-setting young age.

“Going on a sled, face first on your stomach, downhill like 90 miles per hour,” Emery said, describing skeleton.

She discovered the sport a year ago.

“I’m hoping to go to the Youth Olympics that are next year in Korea and hopefully the Olympics when I’m 18,” Emery said.

Since then, she’s won Most Improved Athlete, been the youngest to race down the track at Lake Placid, and has been invited to train around the world for the 2024 Youth Winter Olympic Games in South Korea.

Biancha’s dad, Steve, introduced her to the sport.

“I’m extremely proud,” Steve Emery said. “She has a passion for it. And with any parent, you just want to find something your kid has a passion for — and if they happen to be good at it, on top of having a passion, that’s extra-special.”

He’s a former bobsleigher himself.

“You know, I was, just for a quick year,” Steve said. “One year for the Games, I was a pusher. I wasn’t a pilot, so hers is much more technical than I ever had to deal with.”

When in Utah a year ago, he decided to see if his kids enjoyed it.

“My daughter was naturally very gifted at driving, and my son was not so good, so we pulled him off very quickly before he hurt himself,” Steve Emery said.

His son, Alex, is a football player, hoping to play at an Ivy League school.

After a few runs at skeleton, Steve knew Biancha was special.

“It usually takes 2-3 years to get to the top, and she did it in less than a year,” Steve said. “Won the ‘Most Improved Athlete’ at the camp as well, so we saw she had something good going on.”

Skeleton can be an extremely dangerous sport, with racers moving more than eighty miles per hour and hitting up to four Gs.

“Kind of just whatever happens, happens,” Biancha joked about the extreme speed.

But actually, crashing is not as funny..

“For sure, like the first time I went down was horrible,” Biancha said.

Her dad recalled a story of the first time she crashed.

But she didn’t back down.

“And we were wondering if she was scared or how it would go from that, and we watched her walk — and we knew she was angry about it,” Steve said. “She went back and conquered it.”

“The second few times were a lot better,” Biancha said.

Now she’s training with the best Olympic athletes in the world, with goals to race at the highest level as long as she can.

“As long as my body will let me,” Biancha said about competing. ”It’s a hard sport.”

Over the next few months, Biancha will compete at qualifying races in Lake Placid, New York, Pyeongchang, South Korea and Innsbruck, Austria.

Biancha is also working on a clothing line, to grow her brand and help support her financially as she pursues her Olympic dreams.