As Central Oregon’s housing and rental rates continue to climb, cost of living is pushing some people out 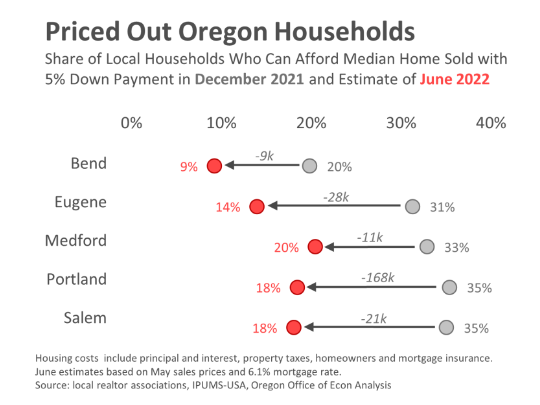 BEND, Ore. (KTVZ) — The cost of housing in Bend and Deschutes County continues to rise, and the resulting squeeze is forcing some people to move.

To go along with record inflation and increased gas prices, more and more people are being priced out of their living situations.

The monthly mortgage on today’s average home with a 5.5% 30-year fixed interest rate in Deschutes County is roughly $3,275 ($2,445 statewide), according to the Oregon Employment Department.

The average monthly wage for workers employed by a Deschutes County business is $4,940.

According to an Oregon Economic Analysis, the share of local households in Bend who can afford a 5% down payment on a median-priced home fell by more than half in recent months, from 20% last December to just 9% in June.

Statewide, the cost of rent for units available is well above the amount some Oregonians can afford.

The evidence of such challenges can be found easily, on or offline, including a recent discussion thread on Reddit’s Bend subreddit entitled, “Bend is forcing me out.”

Noah Chast will be speaking with Damon Runberg, regional economist with the Oregon Employment Department, about the cost of living in Central Oregon. You can watch that story tonight on NewsChannel 21 at Five.

The post As Central Oregon’s housing and rental rates continue to climb, cost of living is pushing some people out appeared first on KTVZ.