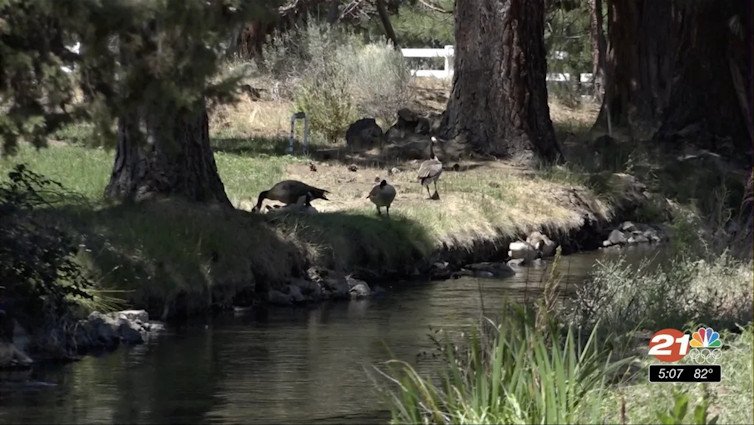 BEND, Ore. (KTVZ) — The Arnold Irrigation District announced this week that it has received final federal authorization for its 12-mile canal-piping project, which should allow construction to start in the new year — but a federal lawsuit brought by opponents of the project also will continue through the courts into 2023.

The USDA Natural Resources Conservation Service in Oregon has released a Final Watershed Plan-Environmental Assessment and a Finding of No Significant Impact for the Arnold Irrigation District Infrastructure Modernization Project.

NRCS Oregon has determined that the project will not cause significant local, regional, or national impacts to the environment. With a completed environmental assessment in place, the project is now eligible for federal funding and may move forward into final design and construction.

The project is a joint effort among NRCS Oregon, Arnold Irrigation District, Deschutes Basin Board of Control, Energy Trust of Oregon, and Farmers Conservation Alliance, in coordination with other agencies, stakeholders, and the public.

The Final EA and other supporting documents for the project are available at: oregonwatershedplans.org/arnold-id.

The project may be partially funded through the Watershed and Flood Prevention Program, administered by NRCS and authorized by Public Law 83-566. Through this program, NRCS provides technical and financial assistance to local organizations (project sponsors) for planning and carrying out projects that help solve natural resource and related economic problems in a specific watershed. These issues can include watershed protection, flood prevention, erosion and sediment control, water supply, water quality, fish and wildlife habitat enhancement, and wetlands creation.

For more information about this and other irrigation modernization efforts, visit oregonwatershedplans.org or the NRCS Oregon public notice webpage.

Irrigation district Manager Steve Johnson told NewsChannel 21 the authorization officially releases construction funding from NRCS, and the district will move forward with pipe procurement and construction bids over the next few weeks.

“The objective is to begin the initial construction activity in later January, consisting of clearing, grubbing and staking out the project area this winter, and then installing over three miles of pipe in the existing canal next winter as Phase 1 of the planned four phases. [grubbing refers to removing some vegetation and some trees that will directly affect the planned pipe path and for project safety reasons],” Johnson said.

Arnold Irrigation will be directly contacting landowners in Phase 1 in the coming week and scheduling on-site face-to-face meetings in January, before construction activity begins.

This summer, when the irrigation district had its earliest shutoff in its 117-year history, Johnson said about 20% of the district’s 42-plus miles of canals are already piped, but “last year, if we had the main canal piped, we’d have been able to make it through a full irrigation season” without an early shutoff.

The NRCS is providing about $26 million for the $35 million, four-phase project. District, on-federal matching money will cover the rest, along with some state funding that is being sought.

If the main canal gets piped in the next 5-7 years, as planned, the district will “be a lot more resilient to drought,” Johnson said. The river and the habitat that depend on it will benefit from the conserved water, as the district diverts less during the summer, also letting more water flow to the North Unit Irrigation District patrons who need it for their summer growing season.

But a group of property owners organized as “Save Arnold Canal” to fight the piping plans filed suit in federal court this fall against the irrigation district and NRCS, claiming the project violates several federal laws.

Johnson said initial proceedings in the lawsuit are scheduled to begin next month. He said the costs of defending the project will be paid for by district patrons and are separate from the project construction and implementation costs.

“Having to respond to this legal action will cost our patrons thousands of dollars,” Johnson said Friday, “and because (the group) also filed against the US Dept of Agriculture-NRCS, American taxpayers will have to also spend many thousands of dollars in this matter.”

Brian Sheets, an Ontario land use and water rights lawyer representing the piping foes, said Save Arnold Canal had tried to “find collaborative solutions between the district and affected property owners near the canal” as alternatives to piping.

“When we approached the district, it was ‘piping or nothing,’” Sheets said, and the NRCS took much the same position.

“We had approached them several times,” he said. “Unfortunately, it came to this, because they wouldn’t listen.”

Sheets said most canals are not piped on an Arizona project, while collaborative solutions are underway with the federal Bureau of Reclamation in the Yakima Basin.

“What they’re doing in Central Oregon is ‘pipe everything,’” he said.

No hearings have been scheduled in the lawsuit as of yet, he added.