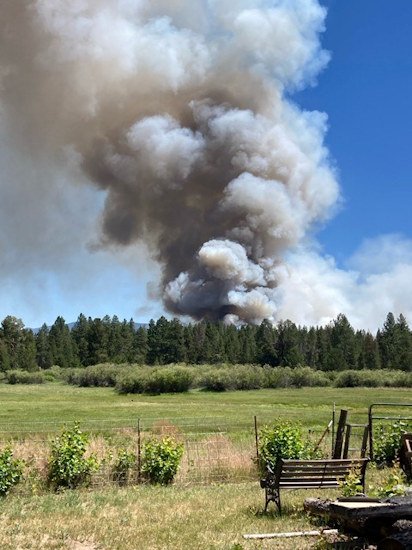 SUNRIVER, Ore. (KTVZ) – A new wildfire broke out early Friday afternoon south of Sunriver, growing to about 15 acres as numerous ground and air crews tackled the blaze on both sides of the BNSF Railway tracks about a mile south of Vandevert Road.

Forest Service spokeswoman Jean Nelson-Dean said the fire was estimated at 10-15 acres as of about 2:45 p.m.

She said the west side of the fire, near structures, had been fully lined by bulldozer crews, while the east side was in the process of being lined.

No evacuations are anticipated, Nelson-Dean said, although some people were seen leaving the area by a NewsChannel 21 photographer.

A Type 3 incident command team has been assigned to the fire, Nelson-Dean added.

A bit earlier, another wildfire, Incident 403, broke out about 11 a.m. Friday near Melvin Butte, between Sisters and Bend, and burned about a quarter-acre in an area previously treated with a prescribed burn. That was “allowing crews to more easily contain and manage the fire to keep it small,” according to the Central Oregon Fire Info Twitter page.