After 4,500 lightning strikes across Oregon in past 2 days, C.O. crews working to stop new fires small 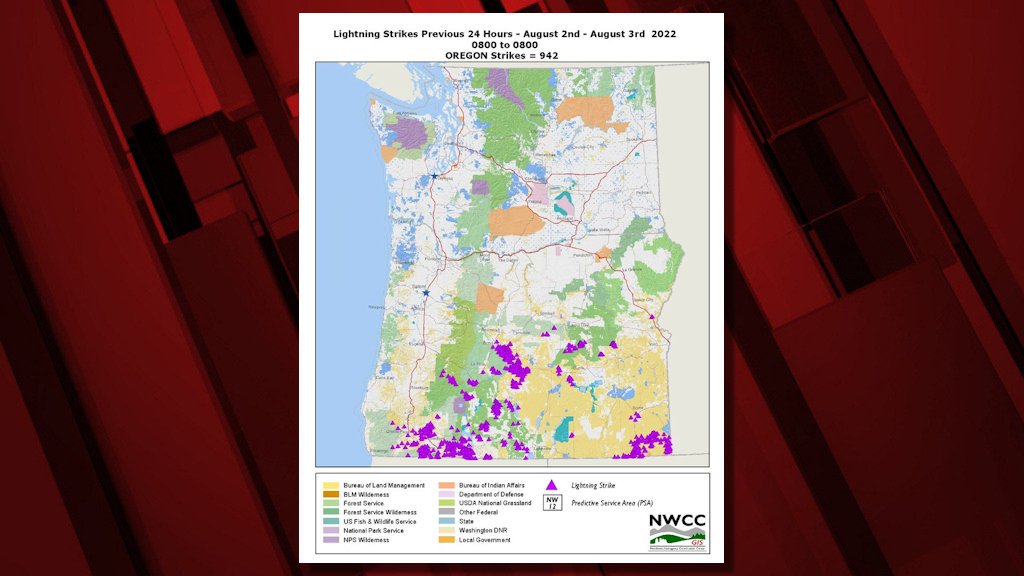 BEND, Ore. (KTVZ) — More new fires continue to emerge in the wake of thunderstorms that have peppered the state with thousands of lightning strikes, and crews are busy putting them out before they can grow, officials said Wednesday.

Two new starts were reported later in the evening yesterday. Firefighters already contained one at 0.1 acres last night. The second is also 0.1 acres and resources will be on scene again today mopping up. Resources are responding to one new smoke report this morning, Incident 544; more information will be available when firefighters arrive on scene. Fire officials anticipate more holdover fires and new starts may be found today and resources are prepared to respond.

Air Attack will be checking on Incident 538 this morning. This fire was reported on private lands about 20 miles east of The Dalles, more information will be available after resources are able to get eyes on it this morning.

Incident 537, which is located on the Deschutes National Forest near Green Butte, has grown to 10 acres. All lines held overnight. Two engines, one crew, one dozer and one water tender will be on scene mopping up today. Ground resources will have air support as well, two Single Engine Air Tankers (SEATs) will be over the fire area to assist with efforts starting around 9 a.m. this morning.

There were no changes overnight on the Fly Creek Fire, it remains 280 acres and 80% contained. Handline was completed down to the river by crews yesterday on the northeast and northwest corners of the fire area. 115 personnel are assigned to the fire today. A few of these resources have been identified as available on scene to support other incidents if the need arises.

An Unmanned Aircraft System (UAS), also known as a drone, will be put to use identifying hot spots across the fire area today. The UAS will primarily be used in areas with very steep and rugged terrain along the northern perimeter near the river, where it is not safe for firefighters to access on foot.

Firefighters will focus on identifying and extinguishing hotspots within the fire perimeter throughout the day with support from water tenders. Aircraft will be available if needed, portions of Lake Billy Chinook may be closed again today if air resources need to dip out of it.

The Juniper Creek Fire has been mapped at 1.6 acres and remains 50% contained. Resources will be on scene again today mopping up. Incident 506 near Lava Lake is 100% contained.

Hot, dry and breezy conditions will persist across the area through today. The potential for isolated thunderstorms across central Oregon remains. A new Red Flag Warning was issued by the National Weather Service for abundant lightning from these thunderstorms for northern and central parts of the area today. Red Flag Warnings for gusty winds and low relative humidity also remain in place for portions of central Oregon through 9 p.m. tonight.

Firefighters have done an incredible job responding to and suppressing the recent wildfires that have been sparked by lighting over the past few days. This recent uptick in fire activity is a great reminder to residents and visitors of central Oregon that the potential for wildfires is high right now. Firefighters have reported that fuels are very susceptible to new starts because of how dry and thick fuels like grass and brush are right now. Fire officials ask the public to do their part to prevent human-caused wildfires, so firefighters don’t have additional fires to respond to.

The post After 4,500 lightning strikes across Oregon in past 2 days, C.O. crews working to stop new fires small appeared first on KTVZ.