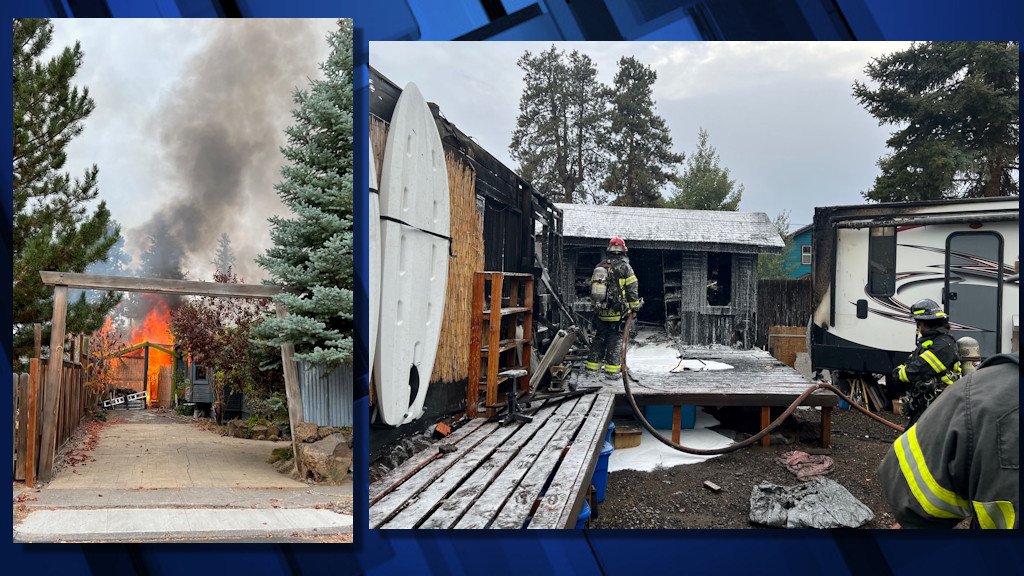 BEND, Ore. (KTVZ) – A fire that caused $125,000 damage to a shed, deck and large travel trailer parked by a century-old northwest Bend home Friday afternoon was traced to a hot welding tool that had been left on the wooden deck, a fire official said.

Bend Fire & Rescue was dispatched shortly after 4 p.m. to the reported structure fire in the area of Northwest Delaware Avenue, and was found to be on a property in the 200 block of Jefferson Place, Deputy Fire Marshal Cindy Kettering said.

A large smoke column was visible while crews were en route, so more crews were sent to the scene, she said.

As the first crews arrived, they found the fire burning the outbuilding, deck and travel trailer. The fire was just beginning to extend to the home, but firefighters quickly knocked down the flames and were able to minimize damage to the 764-square-foot home, built in 1915, Kettering said.

The home’s single occupant was sleeping inside and was awakened by a neighbor alerting him to the fire, Kettering said. American Red Cross disaster assistance was requested for the occupant.

Firefighters were challenged as they worked to finish extinguishing the fire, as the roof structure had several layers of old roofing, the fire official said. She said the 120-square-foot shed was built in 1920.

An investigation determined the resident had been welding earlier in the day and the hot welder was placed on the combustible wood deck, up against the shed, Kettering said.

“Bend Fire & Rescue would like to remind the community that anything which produces heat needs space around it,” Kettering said in a news release. “This could include portable space heaters, fireplaces and woodstoves, even the kitchen stove.

“Outdoors, items such as welders, grinders and portable fire pits need space as well.  Never place any heat producing appliance on a combustible surface, such as a wood deck. For more fire safety information, please visit our website at https://www.bendoregon.gov/government/departments/fire-rescue/safety-tips-emergency-preparedness/fall-winter-safety-tips“