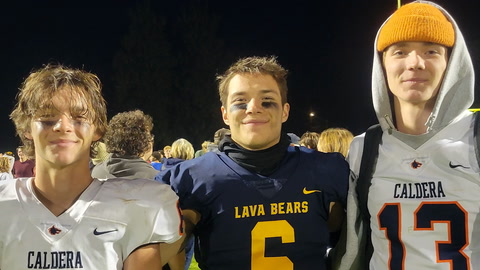 It’s something you rarely see in high school sports, but it happened this season in Bend. Brothers at separate rival high schools faced off against one another on the football field.

Jack, Chase, and Ben Sorenson grew up playing football together.

“I like to bring intensity and just play as hard as I can no matter what,” said Chase.

It set up an October 14 date on the football schedule where the brothers would be back on the gridiron together, but this time as opponents.

“It’s a pretty cool opportunity to play against my siblings,” said Jack.

Chase and Ben are sophomores. Jack is a senior.

Sibling rivalry? As much as we tried to pull it out of them, the brothers had nothing but nice things to say about each other.

“I think we all have our unique attributes. I don’t think it’s fair to say any of us are really the best. I have the experience advantage but they’re both amazing athletes,” said Jack.

“Jack is more of the nice guy. Chase likes to win a lot,” said Ben.

“He’s pretty nice,” said Chase. “He doesn’t really have the aggression that I’m hoping to bring.”

Chase, Ben and the Caldera Wolfpack made the short trip down the road to face Jack and the 3rd-ranked team in the state — the Bend Lava Bears.

“Our expectations are realistic. They have 33 seniors, we have zero so that’s going to be a little bit of a problem in the game,” said Caldera head coach Mike Mitchell before the game.

It was all Lava Bears. Jack had multiple big runs and a touchdown.

Ben was sidelined due to a foot injury and could only watch from the sidelines in street clothes.

And Chase finally got to do what all little brothers dream of — stick big brother just one time and saved a touchdown.

Jack now has bragging rights for the rest of his life. Thankfully for Chase and Ben he won’t use them. He’s too nice to hold it over their heads.