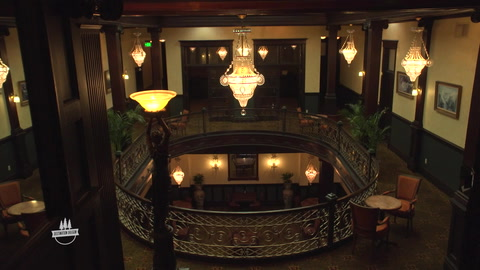 If you Google “Baker City, Oregon”, chances are the first thing that pops up is a picture of a historic hotel that is a landmark in this old west town.

Welcome to the Geiser Grand Hotel, where modern features hide behind the history and, some say, spirits go “bump in the night.”

Today, Baker City has a population of around 10-thousand. But when the Geiser Family built this hotel in 1889, there were far fewer folks here. So what was going on in Baker City that a grand hotel like this was needed?

This was the place to visit, meet, do business, eat, drink and when rowdy cowboys drank a little too much, they might take a pot shot at the hotel’s clock tower. There are bullet holes to prove that.

When the gold rush faded, things slowed down considerably.

Then came World War I. Then the great depression. Hard times.

Fast forward to the early 1990s. The place was literally falling apart. It was such a danger that the city issued a demolition order. But some forward thinking history buffs in Baker City were not about to let the Geiser go away.

Enter Barbara Sidway who initiated a five-year, multimillion dollar restoration project and soon the glory returned to the Geiser Grand.

Each Friday, Saturday and Sunday they give tours of the Geiser Grand. Manager Dylan Smith shares the colorful history of both Baker City and the hotel. He even addresses those spirits in the night that many guests report seeing. One such “spirit” is Annabelle, who they say was an actual resident of the hotel in the late 1800s.

They’re buying the building next door and adding 14-18 jacuzzi rooms. And they are restoring a nearby five-bedroom mansion as a vacation rental.

So, while looking ahead, the owners of the Geiser Grand never lose sight of their colorful past, which is highlighted each and every day.