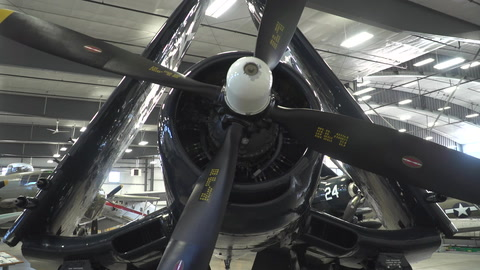 A movie about the first ever African-American pilot in the U.S. Navy hits theaters Wednesday. And while you may not see them, there are couple of Central Oregon pilots in the movie, along with their planes.

“Devotion” shares the story of Jesse Brown, who served during the Korean War and was eventually killed in combat in 1950.

When production for the movie began a couple of years ago, Hollywood called on Jim Martinelli and Mike Oliver from the Erickson Aircraft Collection in Madras.

The collection had something they wanted — one of the 30 remaining F4U Corsairs in the world: the kind of plane Brown flew during the war and at the time of his death.

“The project in itself was close to us in the sense that in 2016, we decided to paint the Corsair as Jesse Brown’s Corsair,” Martinelli told Central Oregon Daily News inside their hangar on Wednesday. “And we decided to do that just because it’s such an under-told story.”

The team had been inspired by the book about Brown written by Adam Makos and they had reached out to the author for photos to perfectly recreate the aircraft.

It was a no-brainer when they were asked to participate in the film.

“Mike Oliver, who did most of the flying in Jesse Brown’s airplane, is African-American,” Martinelli added. “And so not only with the airplane painted that way, but just with the connections, the story is real close to us and it was really cool.”

Filming began in January 2021 and ran through April. The mountains of Wenatchee and Pasco, Washington, were used to re-create the North Korean terrain, and Savannah and Statesboro, Georgia, were used for training scenes.

Even though the Corsair had been painted to the exact likeness of Brown’s plane, the film crew made it look more weathered and made the “211” on the nose look bigger to show up better on film.

Oliver flew the Corsair for the film while Martinelli flew another plane in the Erickson collection — an AD-4 Skyraider, one of the last in the world.

“My role is a small part. If you watch the movie, it’s, I don’t know, 20 or 30 seconds worth of flying,” Martinelli chuckled. “But I fly a Skyraider. So I’m the guy that’s supposed to blow up the bridge and doesn’t quite get the job done, so that the other guys have to.”

He said that while he was flying the only Skyraider in the film, the movie editors replicated the plane digitally so it looks like there are many of them.

“So that’s kind of cool when you see all the Skyraiders on the film for the brief clips, to know that they’re all me!” he said.

Kevin LaRosa II was the aerial coordinator for the film, who also worked on “Top Gun: Maverick“ and multiple other feature films and shows.

“The challenge is to try to make the airplane look correct on the screen,” Martinelli said. “So something that we would normally do in flying, in order to capture it properly, to get it on screen and make the viewer understand what the airplane is doing, you might have to do it in a little bit of kind of an unorthodox way.”

When he wasn’t in the air, Martinelli worked as a mechanic on set, keeping the stars in the sky and witnessing the action.

He and Oliver came away with more than a few memories. They even had Jonathan Majors, Adam Makos and a couple of Jesse Brown’s family members sign their names on an inner portion of the airplane.

Although Brown tragically passed, his high-flying heroism lives on through the film.

“This guy was by himself. I mean, he had to have been the toughest guy that ever walked,” Martinelli said. “I hope people take away how far we’ve grown since then. And to pay attention to history, because history does repeat itself.”

The planes sit once again in the hangar in Madras, now pieces of history from both the sky and the screen.

“Devotion” is now playing in theaters everywhere and Oliver and Martinelli recently flew their planes down to Los Angeles for the big premiere.

To visit the planes from the movie, you can stop by Erickson Aircraft Collection every day except Monday from 10 a.m. to 5 p.m.