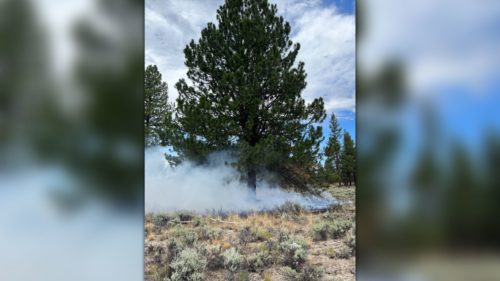 At least 100 new fires were reported in Central Oregon Tuesday following thunderstorms that rolled through the area. More reports of fires could be coming.

Central Oregon Fire Information said there were more than 1,000 lightning strikes in Deschutes, Jefferson and Crook counties Monday and Tuesday.

Most of the fires are staffed with firefighters already, the agency said, and the fires were reported to be less than one-quarter acre in size. But firefighters were also still working to reach some of those fires.

The largest reported fire is the Doghouse Gulch Fire at 16 acres. It’s near the south fork of the John Day River drainage. Air tankers and helicopters were on scene to slow the fire and assist firefighters on the ground.

Smoke jumpers are reportedly working on a cluster of fires near Cultus Lake. The fires were reported to either be less than one-quarter acre or single tree fires.

“These fires are initially dampened by the rain that comes with the thunderstorms and creep around smoldering until growing large enough to be detected,” the agency said in a statement. “To reduce the potential of these fires becoming large fires before they are reported daily flights will be conducted with observers looking for smoke and fires.  In addition to these ‘recon’ flights thermal and infrared technology will be used at night as conditions allow to detect heat and fire from specialty detection aircraft.

As Central Oregon Daily News reported this week, early detection of fires is one of the key elements in fighting them before they get too large. Watch our stories below on one couple who mans a lookout tower and about remote cameras that are used to feed back information to coordinators at home.